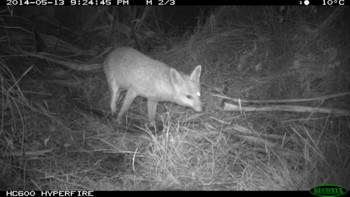 Farm productivity and the health of our natural biodiversity are both dependent constraining fox numbers to a reasonably low level. By coordinating a wide range of fox control activity throughout the community we maximise the impact of everyone’s individual efforts.

Autumn/Winter is here now, and it is an ideal time for setting fox baits. Foxes are kicking their cubs out of their dens at the moment. This is known as dispersal. Dispersal is a time of vulnerability for the cubs. They are not wary, they are searching for new territory and they have not built up avoidance strategies for human-based control systems. Also with the onset of cool weather food is needed to build the fat stores for winter. This makes baiting an especially effective system of control for foxes.  The most widely used chemical, 1080, is especially effective against Canid species. Native animals are able to survive many doses of 1080 due to the presence of 1080 as a natural salt in Australian foliage.  Canids are highly susceptible to 1080 baits, including pets, and so the use of baits is highly regulated. Humans are also very vulnerable to the baits so extreme caution is taken in baiting procedures and programs. If you are interested in controlling foxes on your property, you must also consider the foxes on neighbouring properties and in your district. Group baiting programs are THE most effective way of ensuring large fox depopulation.

If you are interested in participating in the program to control fox numbers then please contact us.