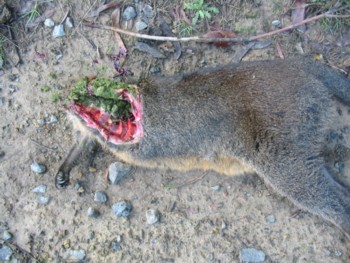 Was it a Fox ? Was it a dog (feral, wild or a wandering pet), or indeed a pack of the afore-mentioned ? Whatever it was, it was ruthless, determined and hungry. And it was efficient. Efficient at hunting down its prey, and at dealing with it once rendered immobile.

The prey, at first we thought it was a common Swamp (Black) Wallaby, but later decided it was probably a small Eastern Grey Kangaroo, ended its days not far from our house, on a track. Tissue and faecal remains found close by the carcass indicated it was caught and killed more or less where we found it.

The roo’s head was cleanly removed, along with its left shoulder and arm. The skeletal remains of the arm was found just a few metres away in long grass. The head remains missing. The innards, except for the kidneys, were removed from the opening where the head was severed. The hunter clearly went inside the roo head-first to extract the organs, all the way down to the intestines. Green faeces lay around the opened neck.

There were no obvious signs of a struggle, which based on our observations from the day before, must have taken place overnight (I had been at the site of the killing the late afternoon beforehand, and it was only when we let our own dog off its chain early the next morning that we became aware of the kill). The “cleanliness” of the kill (whilst the head and shoulder had been removed, the carcass showed no signs of an attack – no claw marks, cuts, etc) indicated an efficient lone hunter, catching the roo around the throat, and somehow effecting a kill without frenzy.

Enquiries with locals and others point to the likelihood of the hunter being a fox, a large fox. Just a few weeks later, I came across a road-kill roo nearby. Two days later, that roo was still there, but it was now headless and “hollowed out”, just like ‘our’ roo. A neighbour has spotted a large fox in the bush on our property.

So, it seems that foxes are not just killers of chooks, nor are they merely scavengers for berries, beetles, rabbits and other small animals. They are highly-evolved predators of large animals. They have NO place in our landscape. I have photographs of native marsupials, such as bandicoots and wallabies, living in our bush. I also have pictures of foxes, but hitherto, I confess to ignorance of, and ambivalence about, the degree of damage that they can wreak on our local fauna population.

Fox control must be taken seriously, and committed effort made to reduce their numbers (eradication is probably an un-realistic aim). I make no apologies for submitting the accompanying gruesome photo of the roo kill with this article. There is plenty of reading material on control measures, and I urge all to establish their own program of fox control.